Chemicals Hitch a Ride onto New Protein for Better Compounds

Chemicals Hitch a Ride onto New Protein for Better Compounds

Proteins are versatile even without modification, sort of like a pickup truck. And they may take on even more duties through bioconjugation, the formation of links to “trailers” of various types, such as fluorescent labels or pharmacologically active chemical groups. Unfortunately, proteins are not easily modified as pickup trucks. Worse, a protein equipped with the equivalent of a trailer hitch may be less than roadworthy. 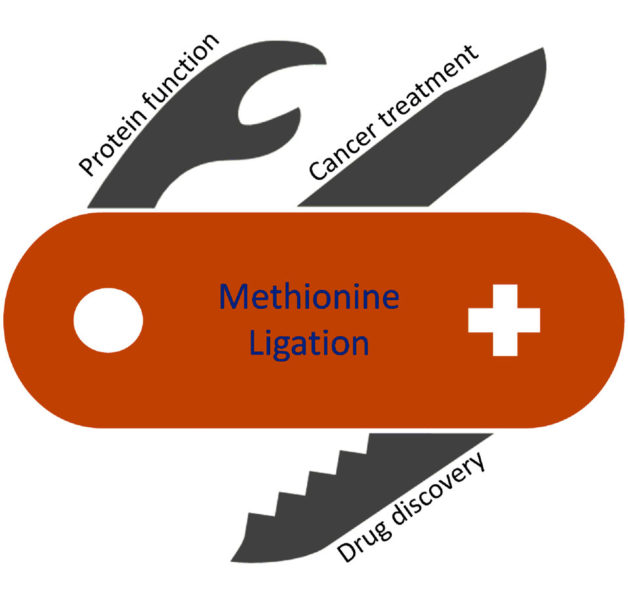 Protein trailer hitches are usually installed at cysteine, the only amino acid with a thiol (S–H) group, which is highly reactive and may be functionalized by a myriad of acid–base conjugation strategies. Cysteine, however, is often involved in the actual function of proteins, so hitching cargo to it creates instability and disrupts its natural function.

Chemists have developed a powerful new method of selectively linking chemicals to proteins, a major advance in the manipulation of biomolecules that could transform the way drugs are developed, proteins are probed, and molecules are tracked and imaged.

An alternative attachment site for a trailer hitch is methionine. Like cysteine, methionine is sulfur-containing amino acid, but instead of a S–H group, methionine has a S–CH3 group, which is not only less reactive, but bulkier. It blocks most hitches.

A workaround—a kind of installation kit—is available. Developed by scientists based at Lawrence Berkeley National Laboratory (Berkeley Lab), the “kit” incorporates oxidation-reduction chemistry and allows cargo to be attached to the methionine sulfur while leaving the extra carbon from the CH3 group in place.

Details appeared February 10 in the journal Science in an article entitled, “Redox-Based Reagents for Chemoselective Methionine Bioconjugation.” The new bioconjugation strategy described by the article could transform the way drugs are developed, proteins are probed, and molecules are tracked and imaged.

“[We] report a strategy for chemoselective methionine bioconjugation through redox reactivity, using oxaziridine-based reagents to achieve highly selective, rapid, and robust methionine labeling under a range of biocompatible reaction conditions,” wrote the article’s authors. “We highlight the broad utility of this conjugation method to enable precise addition of payloads to proteins, synthesis of antibody-drug conjugates, and identification of hyperreactive methionine residues in whole proteomes.”

The new approach is called redox-activated chemical tagging, or ReACT. It uses an oxaziridine group as an oxidant to form sulfimide (S=N) linkages, and it exclusively targets methionine, even in the presence of cysteine.

“The ReACT method can be incorporated into a variety of different tools depending on what you need it to do,” said Christopher Chang, Ph.D., the Science article’s senior author, a faculty scientist at Berkeley Lab, and a professor of chemistry and molecular and cell biology at the University of California, Berkeley. “You can mix-and-match different reagents for a variety of applications.”

One of Dr. Chang’s collaborators, fellow Berkeley Lab faculty scientists F. Dean Toste, Ph.D., compared the process of bioconjugation to hitching cargo onto the back of a pickup truck.

“That cargo can be used for many purposes,” he said. “It can deliver drugs to cancerous cells, or it can be used as a tracking device to monitor the truck’s movements. We can even modify the truck and change it to an ambulance. This change can be done in a number of ways, like rebuilding a truck or putting on a new hitch.”

A key benefit to methionine is that it is a relatively rare amino acid, which allows researchers to selectively target it with fewer side effects and less impact on the biomolecule.

The Berkeley Lab scientists put ReACT to the test by synthesizing an antibody–drug conjugate to highlight its applicability to biological therapeutics. They also identified the metabolic enzyme enolase as a potential therapeutic target for cancer, showing that the tool could help home in on new targets for drug discovery.

In the long term, the researchers say, this new bioconjugation tool could be used in:

1) Nanotechnology, where protein conjugation can help make nanomaterials compatible with air and water, reducing toxicity
2) The creation of artificial enzymes that can be recycled, have better stability, and have improved activity and selectivity through chemical protein modification
3) Synthetic biology, where it can be used to selectively make new proteins or augment the function of existing ones

“This method could also add to the functionality of living organisms by directly modifying natural proteins to improve their stability and activity without making a genetically modified organism that relies on gene editing,” indicated Dr. Chang. “It could have implications for the sustainable production of fuels, food, or medicines, as well as in bioremediation.”