Pharmacokinetics is the study of the way the body deals with the absorption, distribution, metabolism, and excretion of drugs under investigation expressed in mathematical terms. The effects and the duration of action of the drug are also taken into account. 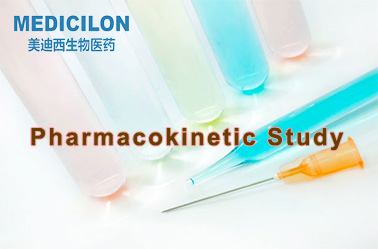 With over 12 years of experience of operating a GLP and non-GLP compliant laboratory, Medicilon provides pharmacokinetic analysis and bioanalytical services with a dedicated team of specialists. We have carried out pharmacokinetic (PK), pharmacodynamics (PD) and toxicokinetic (TK) studies for all stages of drug development providing expertise and quality to our clients.

Absorption is the process whereby a substance entering the body is assimilated by it. For proper pharmacokinetics study, it is necessary to know both the rate and the extent to which the active substance or therapeutic moiety are absorbed. They include substances intended to produce / not produce systematic effects.

Distribution is the dispersion or dissemination of substances throughout the fluids and tissues of the body.

Metabolism is the process whereby a substance is irreversibly transformed into metabolites.

Excretion is the elimination of the substance from the body. In rare cases, not all substances are eliminated; some drugs irreversibly accumulate in a tissue in the body.