Only a few decades ago, it would have been largely inconceivable that resident microbes of our digestive tract would play a significant role in neurological diseases. Though roughly 75% of patients with Parkinson’s disease (PD) have gastrointestinal (GI) abnormalities, primarily constipation, it had been assumed for many years that this was a side effect of neurodegeneration. However, in recent years, researchers have begun to uncover important links between microbial communities of the gut and neurological health. 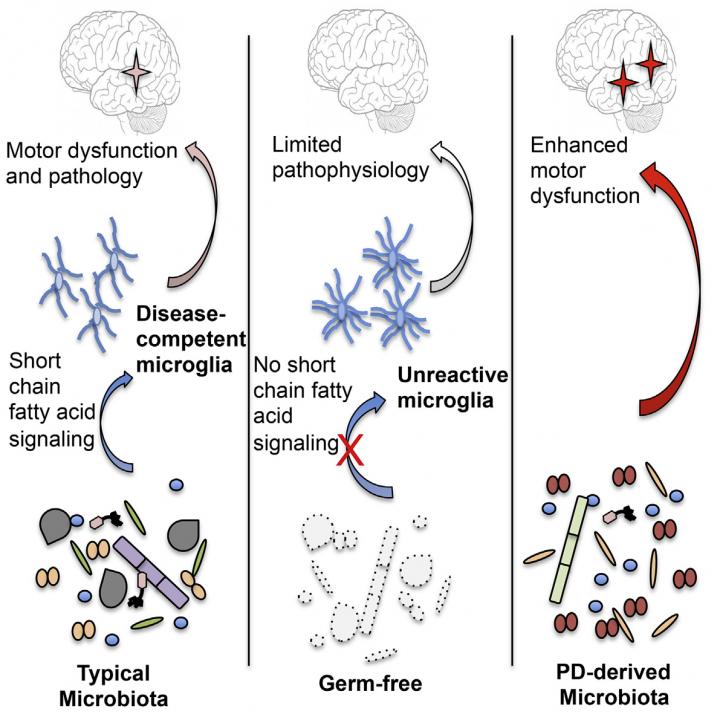 Now, a team of investigators led by scientists at the California Institute of Technology (Caltech) have discovered for the first time a functional link between bacteria in the intestines and PD. The researchers were able to show that changes in the composition of gut bacterial populations—or possibly gut bacteria themselves—are actively contributing to and may even cause the deterioration of motor skills that is the hallmark of this disease.

“We have discovered for the first time a biological link between the gut microbiome and PD,” explained senior study investigator Sarkis Mazmanian, Ph.D., professor of microbiology in the division of biology and biological engineering at Caltech and scientific founder of Axial Biotherapeutics. “Our findings provide a completely new paradigm for how environmental factors may contribute to PD and possibly other neurodegenerative disorders. The notion that these diseases may be impacted by pathology in the gut and not only in the brain is a radical departure from conventional research in neuroscience. PD is complex, and there are several genetic predispositions and environmental risks that play a role, but we believe our findings shed light on a previously unrecognized and potentially important part of this puzzle.”

PD affects close to 1 million people in the U.S. and up to 10 million worldwide, making it the second most common neurodegenerative disease. Characteristic features of PD include symptoms such as tremors and difficulty walking, aggregation of a protein called alpha-synuclein (αSyn) within cells in the brain and gut, the presence of inflammatory cytokines within the brain, and GI abnormalities.

“The gut is a permanent home to a diverse community of beneficial and sometimes harmful bacteria, known as the microbiome, that is important for the development and function of the immune and nervous systems,” Dr. Mazmanian noted. “Remarkably, 70% of all neurons in the peripheral nervous system—that is, not the brain or spinal cord—are in the intestines, and the gut’s nervous system is directly connected to the central nervous system through the vagus nerve. Because GI problems often precede the motor symptoms by many years, and because most PD cases are caused by environmental factors, we hypothesized that bacteria in the gut may contribute to PD.”

To test this, the Caltech researchers utilized a mouse model of PD in which mice overproduce αSyn and display symptoms of PD. One group of mice had a complex consortium of gut bacteria; the others, called germ-free mice, were bred in a completely sterile environment at Caltech and thus lacked gut bacteria. The researchers had both groups of mice perform several tasks to measure their motor skills, such as running on treadmills, crossing a beam, and descending from a pole. The germ-free mice performed significantly better than the mice with a complete microbiome.

“This was the ‘eureka’ moment,” remarked lead study investigator Timothy Sampson, Ph.D., a postdoctoral scholar in Dr. Mazmanian’s laboratory. “The mice were genetically identical—both groups were making too much αSyn. The only difference was the presence or absence of gut microbiota. Once you remove the microbiome, the mice have normal motor skills even with the overproduction of αSyn.”

“All three of the hallmark traits of PD were gone in the germ-free models,” Dr. Sampson added. “Now we were quite confident that gut bacteria regulate, and are even required for, the symptoms of PD. So, we wanted to know how this happens.”

The findings from this study were published recently in Cell in an article entitled “Gut Microbiota Regulate Motor Deficits and Neuroinflammation in a Model of Parkinson’s Disease.”

When gut bacteria break down dietary fiber, they produce molecules called short-chain fatty acids (SCFAs), such as acetate and butyrate. Previous research has shown that these molecules also can activate immune responses in the brain. Hence, the Caltech team hypothesized that an imbalance in the levels of SCFAs regulates brain inflammation and other symptoms of PD. Indeed, when germ-free mice were fed SCFAs, microglia cells—which are immune cells residing in the brain—became activated. Such inflammatory processes can cause neurons to malfunction or even die. Amazingly, the germ-free mice fed SCFAs showed motor disabilities and αSyn aggregation in regions of the brain linked to PD.

To make certain that this wasn’t just a phenomenon occurring in mice, Dr. Mazmanian, and his team obtained fecal samples from patients with PD and healthy controls. The human microbiome samples were transplanted into germ-free mice, which then remarkably began to exhibit symptoms of PD. These mice also showed higher levels of SCFAs in their feces. Transplanted fecal samples from healthy individuals, in contrast, did not trigger PD symptoms, unlike mice harboring gut bacteria from PD patients.

“This really closed the loop for us,” Dr. Mazmanian said. “The data suggest that changes in the gut microbiome are likely more than just a consequence of PD. It’s a provocative finding that needs to be  studied further, but the fact that you can transplant the microbiome from humans to mice and transfer symptoms suggests that bacteria are a major contributor to disease.”

“Gut bacteria provide immense physiological benefit, and we do not yet have the data to know which particular species are problematic or beneficial in PD,” continued Dr. Mazmanian. “It is important to note that there are currently no antibiotic or microbial treatments available for human use that can replicate the effect we observed in mice. However, our next step will be to define the specific gut microbes that may contribute to the development of PD, as this could translate into novel biomarkers to identify at-risk patients. Additionally, these findings could lead to novel therapeutic approaches that avoid the complications of delivering drugs to the brain and may be safer and more effective.”