By losing a single microRNA (miRNA), pluripotent stem cells may accomplish a rare feat: they may become totipotent. That is, they may give rise not only to all the tissues of a developing embryo, but also to extraembryonic tissues—the placenta and yok sac. In short, embryonic stem cells (ESCs) and induced pluripotent stem cells (iPSCs) may acquire the developmental potential of a zygote, or fertilized egg. 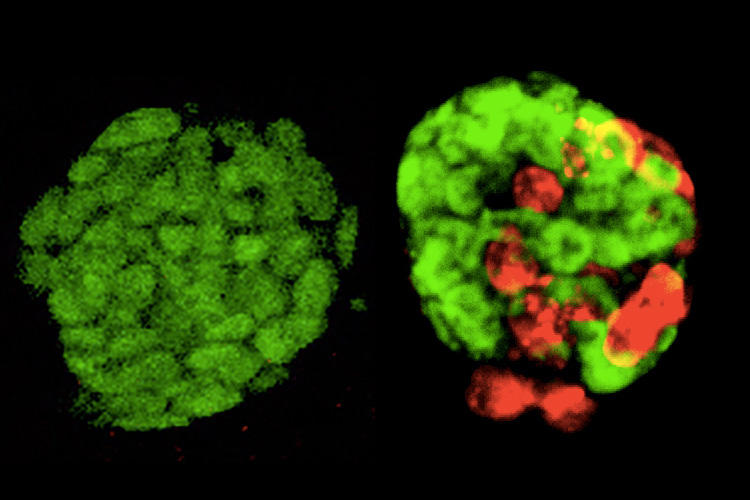 miRNAs, small noncoding RNAs that do not translate into proteins, are well known for their ability to regulate gene expression. But they also influence cell fate. For example, they have been shown to maintain cell fate identity in multiple contexts. miRNAs can restrict the cell fate potential of pluripotent stem cells, and they can act as a barrier to somatic reprogramming.

Researchers from the University of California, Berkeley, have found a way to reprogram mouse embryonic stem cells so that they exhibit developmental characteristics resembling those of fertilized eggs, or zygotes.  Details of the study appeared January 12 in the journal Science, in an article entitled, “Deficiency of MicroRNA miR-34a Expands Cell Fate Potential in Pluripotent Stem Cells.”

By enriching our knowledge of the molecular pathways that determine cell fate, the current study could lead to experimental systems capable of dissecting totipotency. Ultimately, the study could help broaden the repertoire of tissues that can be generated from stem cells, with significant implications for regenerative medicine and stem cell-based therapies.

“We show that microRNA miR-34a deficiency expands the developmental potential of mouse pluripotent stem cells to yield both embryonic and extraembryonic lineages and strongly induce MuERV-L (MERVL) endogenous retroviruses, similar to what is seen with totipotent 2-cell blastomeres,” wrote the authors of the Science article. “miR-34a restricts the acquisition of expanded cell fate potential in pluripotent stem cells, and represses MERVL expression through transcriptional regulation, at least in part, by targeting the transcription factor Gata2.”

The current study was led by Lin He, Ph.D., a UC Berkeley associate professor of molecular and cell biology. It not only reveals a novel mechanism regulating the “totipotent-like” stem cell state, noted Dr. He, but also provides a powerful cell-culture system to further study totipotency.

“Studies on embryonic development greatly benefit from the culture system of ESCs and, more recently, iPSCs. These experimental systems allow scientists to dissect key molecular pathways that specify cell fate decisions in embryonic development,” explained Dr. He. “But the unique developmental potential of a zygote, formed right after the sperm and egg meet, is very, very difficult to study, due to limited materials and the lack of a cell-culture experimental system.”

He and her colleagues found that a miRNA called miR-34a appears to be a brake that prevents both ESCs and iPSCs from producing extraembryonic tissues. When this miRNA was genetically removed, both ESCs and iPSCs were able to expand their developmental decisions to generate embryo cell types as well as placenta and yolk sac linages. In their experiments, about 20% of ESCs lacking the miRNA exhibited expanded fate potential. Furthermore, this effect could be maintained for up to a month in cell culture.

“What is quite amazing is that manipulating just a single miRNA was able to greatly expand cell fate decisions of ESCs,” Dr. He said. “This finding not only identifies a new mechanism that regulates totipotent stem cells, but also reveals the importance of noncoding RNAs in stem cell fate.”

Additionally, in this study, Dr. He’s group discovered an unexpected link between miR-34a and a specific class of mouse retrotransposons. Long regarded as “junk DNA,” retrotransposons are pieces of ancient foreign DNA that make up a large fraction of the mammalian genome. For decades, biologists assumed that these retrotransposons served no purpose during normal development, but He’s findings suggest they may be closely tied to the decision-making of early embryos.

“An important open question is whether these retrotransposons are real drivers of developmental decision-making,” said Todd MacFarlan, Ph.D., a co-author of the current study and a researcher at the Eunice Kennedy Shriver National Institute of Child Health and Human Development in Bethesda, MD.