The immune system is a host defense system comprising many biological structures and processes within an organism that protects against disease. To function properly, an immune system must detect a wide variety of agents, known as pathogens, from viruses to parasitic worms, and distinguish them from the organism’s own healthy tissue. 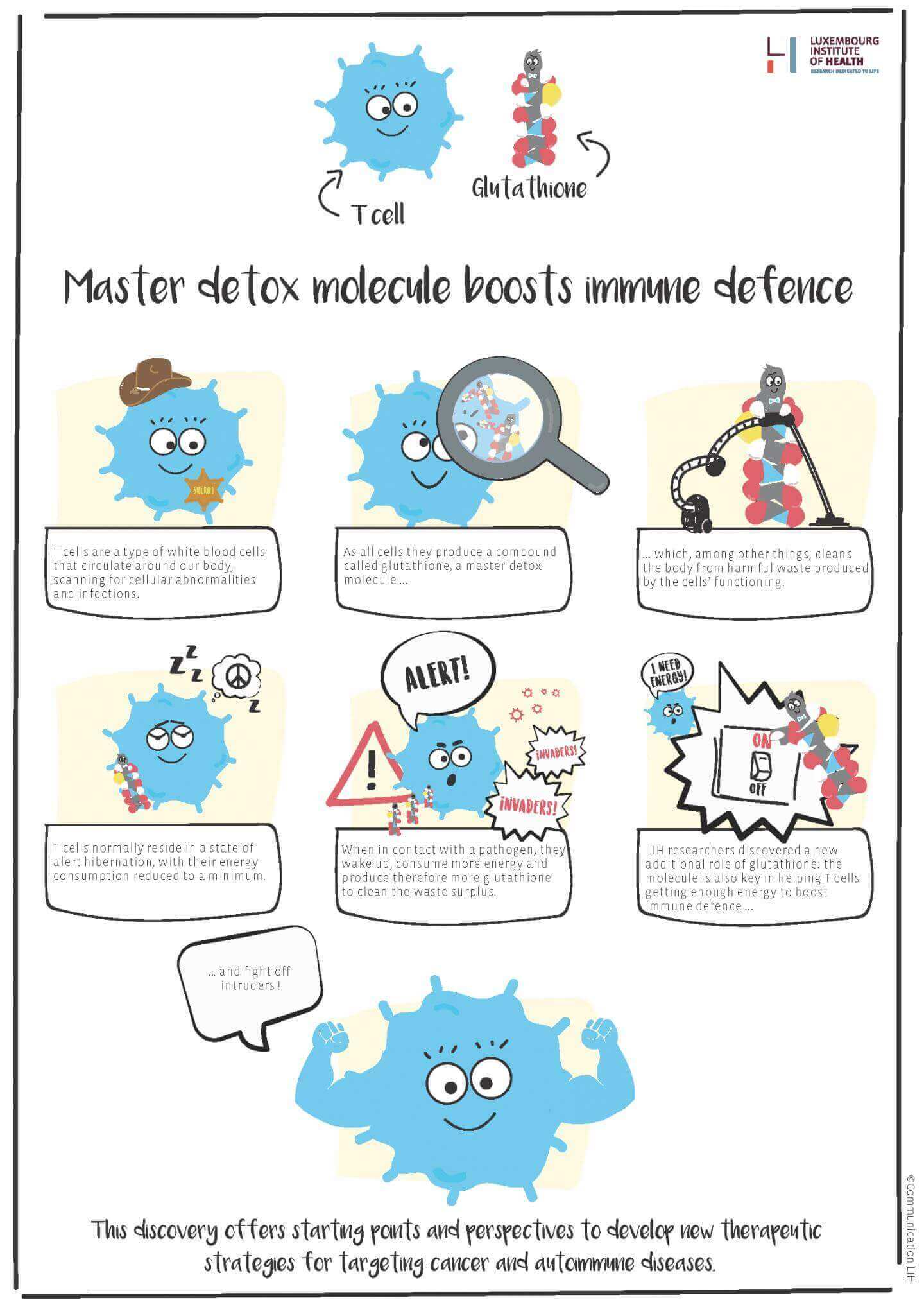 Glutathione (GSH), best known for its antioxidant activity, is busier than we knew. The molecule also helps to regulate the metabolic activity of T cells. Although GSH is not needed for early T-cell activation, it promotes T-cell growth, sustaining immune responses to infection and cancer. This previously unknown function of GSH suggests new possibilities in autoimmune and immuno-oncology research.

The new finding that GSH sits at the nexus of cellular metabolism and immune activation emerged from research conducted by researchers led by Dirk Brenner, Ph.D., a professor at the Luxembourg Institute of Health (LIH). Prof. Brenner and colleagues summarized their work in the journal Immunity in an article entitled “Glutathione Primes T Cell Metabolism for Inflammation.”

This article explains how Prof. Brenner’s team discovered that the antioxidant GSH produced by T cells serves not only as a garbage collector to dispose of reactive oxygen species (ROS) and free radicals, but also as a key switch for energy metabolism that controls the immune response, and is thus of high relevance to various diseases.

No previous research group had studied the mechanism of action of antioxidants in T cells to great detail before. In the current study, however, the scientists employed genetically modified mice in whose T cells the Gclc (for glutamate cysteine ligase) gene had been removed, and therefore these cells could not produce GSH.

“Gclc-deficient T cells initially underwent normal activation but could not meet their increased energy and biosynthetic requirements,” wrote the authors of the Immunity paper. “GSH deficiency compromised the activation of mammalian target of rapamycin-1 (mTOR) and expression of NFAT [nuclear factor of activated T cells] and Myc transcription factors, abrogating the energy utilization and Myc-dependent metabolic reprogramming that allows activated T cells to switch to glycolysis and glutaminolysis.”

Essentially, the researchers found that in the experimental mice, the control of viruses is impaired—mice that lack the Gclc gene have an immunodeficiency. “But by the same token,” Prof. Brenner added, “this also meant the mice could not develop any autoimmune disease such as multiple sclerosis.”

Further tests confirmed that the mice cannot produce any GSH in their T cells, and indicated that several signaling events that directly boost metabolism and increase energy consumption are lacking.

“Our body has to keep our immune system in a carefully balanced equilibrium,” explained Prof. Brenner. “If the body’s innate defenses are overactive, then they turn against the body. This is what happens in autoimmune diseases like multiple sclerosis or arthritis, for example. However, if the defenses are too weak, then infections cannot be handled or body cells can proliferate uncontrolled and grow to form tumors, which can become life threatening.”

Without GSH, T cells do not become fully functional. They remain in a state of readiness, a kind of alert hibernation, and their energy consumption remains low. If T cells remain in such a state, immune defenses are on standby. Unless GSH helps shift the energy balance of T cells, immune responses may be weakened, infections may run rampant, and errant body cells may proliferate uncontrolled and grow to form tumors. Yet self-destructive autoimmune responses are less likely.

“It is intriguing to see that cellular metabolism and immune activation are so tightly entangled and that a fine-grained interplay is essential to achieve a correct function,” said Karsten Hiller, Ph.D., a co-author of the current study and a professor at the Braunschweig University of Technology.

“These fascinating results form a basis for a targeted intervening in the metabolism of immune cells and for developing a new generation of immunotherapies,” added Markus Ollert, Ph.D., a professor at and director of the Department of Infection and Immunity at LIH.

Prof. Brenner sees his T-cell experiments as a prelude to more in-depth investigation of the energy balance of immune cells in general.

“If we understand the differences in the molecular mechanisms by which they stimulate their metabolism during defensive or autoimmune responses, then we can discover clues as to possible attack points for therapeutic agents regulating the immune response,” he explained. “It is also important to know why the immune cells that are actually supposed to fight cancer cells drop to a low metabolic state and in some cases even actively suppress an immune response against the tumor. Counteractive metabolism-stimulating measures could make the immune cells work more efficiently and fight off cancer more effectively.”