The human immunodeficiency virus (HIV) is a lentivirus that causes HIV infection and over time acquired immunodeficiency syndrome (AIDS). AIDS is a condition in humans in which progressive failure of the immune system Allows life-threatening opportunistic infections and cancers to thrive. 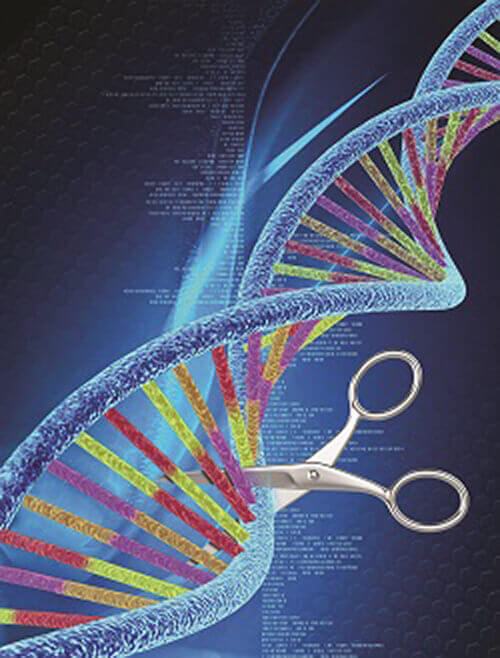 Due to their innate nature to hide away and remain latent for extended periods of time, HIV infections have proven notoriously difficult to eliminate. Yet now, new data released from a research team led by investigators at the Lewis Katz School of Medicine at Temple University (LKSOM) and the University of Pittsburgh shows that HIV DNA can be excised from the genomes of living animals to eliminate further infection. This is the first time a “humanized” model in mice has been used by transplanting human immune cells into mice and infecting the animals with the virus. Findings from the new study were published recently in Molecular Therapy in an article entitled “In Vivo Excision of HIV-1 Provirus by saCas9 and Multiplex Single-Guide RNAs in Animal Models.”

This is the first study to demonstrate that HIV-1 replication can be completely shut down and the virus eliminated from infected cells in animals with a powerful gene-editing technology known as CRISPR/Cas9. The new work builds on a previous proof-of-concept study that the team published in 2016, in which they used transgenic rat and mouse models with HIV-1 DNA incorporated into the genome of every tissue of the animals’ bodies. They demonstrated that their strategy could delete the targeted fragments of HIV-1 from the genome in most tissues in the experimental animals.

“Our new study is more comprehensive,” noted co-senior study author Wenhui Hu, M.D., Ph.D., associate professor in the Center for Metabolic Disease Research and the department of pathology at LKSOM. “We confirmed the data from our previous work and improved the efficiency of our gene-editing strategy. We also show that the strategy is effective in two additional mouse models, one representing acute infection in mouse cells and the other representing chronic, or latent, infection in human cells.”

In this new study, the LKSOM team genetically inactivated HIV-1 in transgenic mice, reducing the RNA expression of viral genes by roughly 60% to 95%—confirming their earlier findings. They then tested their system in mice acutely infected with EcoHIV, the mouse equivalent of human HIV-1.

“During acute infection, HIV actively replicates,” explained co-senior study investigator Kamel Khalili, Ph.D., professor and chair of the department of neuroscience at LKSOM. “With EcoHIV mice, we were able to investigate the ability of the CRISPR/Cas9 strategy to block viral replication and potentially prevent systemic infection.” The excision efficiency of their strategy reached 96% in EcoHIV mice, providing the first evidence for HIV-1 eradication by prophylactic treatment with a CRISPR/Cas9 system.

In the third animal model, a latent HIV-1 infection was recapitulated in humanized mice engrafted with human immune cells, including T cells, followed by HIV-1 infection. “These animals carry latent HIV in the genomes of human T cells, where the virus can escape detection, Dr. Hu explained. Amazingly, after a single treatment with CRISPR/Cas9, viral fragments were successfully excised from latently infected human cells embedded in mouse tissues and organs.

In all three animal models, the researchers employed a recombinant adeno-associated viral (rAAV) vector delivery system based on a subtype known as AAV-DJ/8. “The AAV-DJ/8 subtype combines multiple serotypes, giving us a broader range of cell targets for the delivery of our CRISPR/Cas9 system,” remarked Dr. Hu. Additionally, the researchers re-engineered their previous gene-editing apparatus to now carry a set of four guide RNAs, all designed to efficiently excise integrated HIV-1 DNA from the host cell genome and avoid potential HIV-1 mutational escape.

To determine the success of the strategy, the team measured levels of HIV-1 RNA and used a novel and cleverly designed live bioluminescence imaging system. “The imaging system, developed by Dr. Won-Bin Young while at the University of Pittsburgh, pinpoints the spatial and temporal location of HIV-1-infected cells in the body, allowing us to observe HIV-1 replication in real time and to essentially see HIV-1 reservoirs in latently infected cells and tissues,” stated Dr. Khalili.

The researchers were excited by their findings and are optimistic about their next steps. “The next stage would be to repeat the study in primates, a more suitable animal model where HIV infection induces disease, in order to further demonstrate the elimination of HIV-1 DNA in latently infected T cells and other sanctuary sites for HIV-1, including brain cells,” Dr. Khalili concluded. “Our eventual goal is a clinical trial in human patients.”