The synthetic biologists from Imperial College London have re-engineered yeast cells to manufacture the nonribosomal peptide antibiotic penicillin. In laboratory experiments, they were able to demonstrate that this yeast had antibacterial properties against streptococcus bacteria. 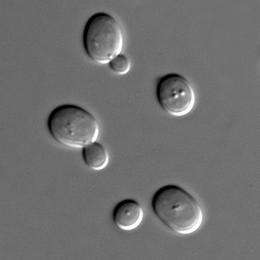 The authors of the study (“Biosynthesis of the Antibiotic Nonribosomal Peptide Penicillin in Baker’s Yeast”), which is published in Nature Communications, say their new method demonstrates the effectiveness of using this kind of synthetic biology as a route for discovering new antibiotics. This could open up possibilities for using re-engineered yeast cells to develop new forms of antibiotics and anti-inflammatory drugs from nonribosomal peptides such as penicillin, they add.

However, genetically engineering the more exotic fungi and bacteria—the ones likely to have antibacterial properties—is challenging because scientists don’t have the right tools and they are difficult to grow in a lab environment, requiring special conditions.

Baker’s yeast cells on the other hand are easy to genetically engineer. Scientists can simply insert DNA from bacteria and fungi into the yeast to carry out experiments, offering a viable new host for antibiotic production research. The rise of synthetic biology methods for yeast is expected to allow researchers to make and test many new gene combinations that could produce an entire new range of new antibiotics.

While this approach does show promise, the investigators have so far produced nonribosomal peptide antibiotic penicillin in small quantities. More research needs to be done to see if it can be adapted to finding other compounds and to get production up to commercially viable quantities.

“Humans have been experimenting with yeast for thousands of years. From brewing beer to getting our bread to rise, and more recently for making compounds like anti-malarial drugs, yeast is the microscopic workhorse behind many processes,” explains Tom Ellis, Ph.D., from the Centre for Synthetic Biology at Imperial College London. “The rise of drug-resistant superbugs has brought a real urgency to our search for new antibiotics. Our experiments show that yeast can be engineered to produce a well-known antibiotic. This opens up the possibility of using yeast to explore the largely untapped treasure trove of compounds in the nonribosomal peptide family to develop a new generation of antibiotics and anti-inflammatories.”

Previously, scientists have demonstrated that they could re-engineer a different yeast to make penicillin. However, that species of yeast is not as well understood or amenable to genetic manipulation compared to baker’s yeast, making it less suitable for the development of novel antibiotics using synthetic biology.

In their experiments, the team used genes from the filamentous fungus (Penicillium chrysogenum) from which penicillin is naturally derived. These genes caused the yeast cells to produce penicillin via a two-step biochemical reaction process. First the cells made the backbone molecule by a complex reaction, and then this was modified by a set of further fungal enzymes that turn it into the active antibiotic.

During the experimentation process, the team discovered that they didn’t need to extract the penicillin molecules from inside the yeast cell. Instead, the cell was expelling the molecules directly into the solution it was in. This meant that the team simply had to add the solution to a petri dish containing Streptococcus bacteria to observe its effectiveness. In the future, this approach could greatly simplify the molecule testing and manufacturing process, noted Ali Awan, Ph.D., co-author from the department of bioengineering at Imperial College London.

“Fungi have had millions of years to evolve the capability to produce bacteria-killing penicillin. We scientists have only been working with yeast in this context for a handful of years, but now that we’ve developed the blueprint for coaxing yeast to make penicillin, we are confident we can further refine this method to create novel drugs in the future,” he said. “We believe yeast could be the new mini-factories of the future, helping us to experiment with new compounds in the nonribosomal peptide family to develop drugs that counter antimicrobial resistance.”