The Transwell Migration Assay is a commonly used test to study the migratory response of endothelial cells to angiogenic inducers or inhibitors. It is a highly integrated, multi-step process that orchestrates embryonic morphogenesis, tissue repair and regeneration. It plays a pivotal role in the disease progression of cancer, mental retardation, atherosclerosis and arthritis. The initial response of a cell to a migration-promoting agent is to polarize and extend protrusions in the direction of the attractant; these protrusions can consist of large, broad lamellipodia or spike-like filopodia. 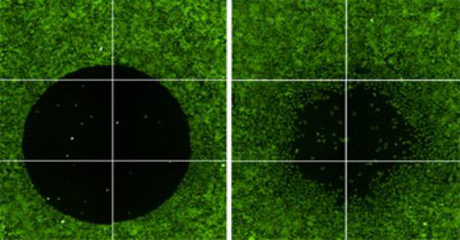 There are four different types of Cell Migration: migration of cells based on a chemical environment (chemotaxis); cell migration within a gradient of chemoattractants (haptotaxis); movement of cells through the vascular endothelium (transmigration) and migration of cells into a wound to close the gap (wound healing).

Most of these assays are compatible with an imaging based readout. Recent strategies have resulted in more advanced cell migration assays that are more accurate, sensitive, convenient and robust, especially in wound healing.

Chemotaxis describes cell migration based on chemicals in a cell’s surrounding environment. Chemotaxis can indicate cell migration either toward or away from a particular chemical signal. Cell chemotaxis plays a pivotal role in the progression of cancer and other diseases.

Cell haptotaxis describes cell migration toward or along a gradient of chemoattractants or adhesion sites in the extracellular matrix.

Transmigration describes the migration of cells through the vascular endothelium toward a chemoattractant. The initial arrest and attachment of tumor cells to vascular endothelium precedes their extravasation from the blood stream and is a crucial step in the tumor metastatic cascade. Tumor cell extravasation is equivalent, in many respects, to the entry of leukocytes into inflammatory tissue. Leukocyte extravasation consists of multiple, consecutive processes including the capture of circulating leukocytes, subsequent leukocyte rolling, arrest, firm adhesion and transmigration.

Wounded tissue initiates a complex and structured series of events in order to repair the damaged region. These events may include increased vascularization by angiogenic factors, an increase in cell proliferation and extracellular matrix deposition, and infiltration by inflammatory immune cells as part of the process to destroy necrotic tissue. The wound healing process begins as cells polarize toward the wound, initiate protrusion, migrate and close the wound area.

Traditionally scratch assays have been used to study cell migration, cell proliferation and wound healing. However, these assays lack a consistently defined wound gap and can result in high inter-sample variation.

The Role of Cell Migration in Tumor Development

Cell Migration is a hallmark in tumor development. It is relevant for angiogenesis to assure tumor nutrition as well as for the formation of metastases, in which tumor cells leave the primary tumor site and invade other tissues. The process of cell movement is induced by various agents such as growth factors and chemokines and is associated with complex signaling events which involve many components of the cellular motility machinery. Such signaling components (e.g. FAK, cSrc, ROCK) as well as ligand/receptor interactions that induce migration represent attractive targets for tumor therapy. The assay described below facilitates the identification of potential inhibitors in a 96-well format that is most comparable with the widely used scratch assay and addresses chemokinetic movement of cells.

Tips : Above is part of cell migration assay, transwell migration assay. You can also CONTACT US with any question or enquiry you may have. We will be happy to discuss your needs in detail and design an appropriate plan of action.