In large patches of ulcerous skin, surviving cells prioritize inflammation and wound closure. That’s what they’re programmed to do. Cells, however, can be reprogrammed – as laboratory procedures have demonstrated. Now cells can also be reprogrammed in living tissue, wounded tissue, to expedite healing. No balm is necessary, unless stem cell factors may be considered a kind of balm.

The new approach to cellular reprogramming was developed by a Salk Institute team of scientists led by Juan Carlos Izpisua Belmonte, Ph.D., a professor in the Gene Expression Laboratories at the Salk Institute. Dr. Belmonte and his team found a way to directly convert the cells in an open wound into new skin cells. Essentially, the scientists reprogrammed the cells to a stem-cell-like state. 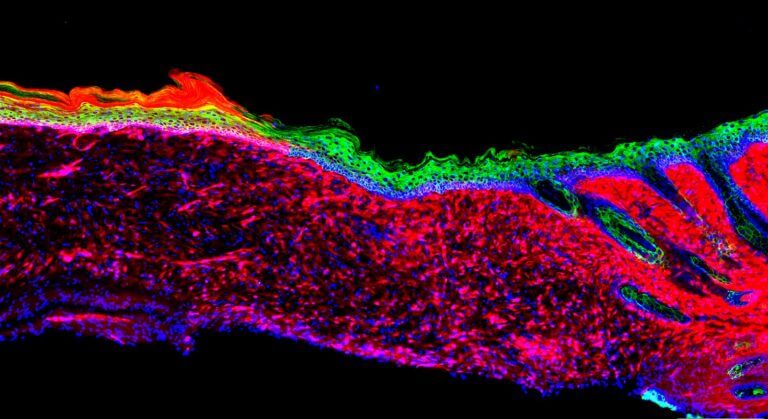 Reprogramming wound-resident cells could be useful for healing skin damage, countering the effects of aging, and helping us to better understand skin cancer. It could also supplant plastic surgery and the application of skin grafts as a way to treat large cutaneous ulcers, including those seen in people with severe burns, bedsores, or chronic diseases such as diabetes.

When an ulcer is especially large, it can be difficult for surgeons to graft enough skin. In these cases, researchers can isolate skin stem cells from a patient, grow them in the lab and transplant them back into the patient. However, such a procedure requires an extensive amount of time, which may put the patient’s life at risk and is sometimes not effective.

“Our observations constitute an initial proof of principle for in vivo regeneration of an entire three-dimensional tissue like the skin, not just individual cell types as previously shown,” says Dr. Izpisua Belmonte. “This knowledge might not only be useful for enhancing skin repair but could also serve to guide in vivo regenerative strategies in other human pathological situations, as well as during aging, in which tissue repair is impaired.”

Dr. Izpisua Belmonte is the senior author of a paper that appeared in the journal Nature, in an article titled, “In vivo reprogramming of wound-resident cells generates skin epithelial tissue.” In this paper, the authors focus on a type of cell called basal keratinocytes, stem-cell-like cells that act as precursors to the different types of skin cells.

To directly convert wound cells into basal keratinocytes – without taking any cells out of the body – the Salk Institute scientists decided to try an alternative form of cellular reprogramming.

“We generated expandable epithelial tissues using in vivo reprogramming of wound-resident mesenchymal cells,” wrote the authors of the Nature article. “Transduction of four transcription factors that specify the skin-cell lineage enabled efficient and rapid de novo epithelialization from the surface of cutaneous ulcers in mice.”

The researchers began by comparing the levels of different proteins of the two cell types (inflammation and keratinocytes) to get a sense of what they’d need to change to reprogram the cells’ identities. They pinpointed 55 reprogramming factors (proteins and RNA molecules) that were potentially involved in defining the distinct identity of the basal keratinocytes. Then, through trial and error and further experiments on each potential reprogramming factor, they narrowed the list down to four factors that could mediate the conversion to basal keratinocytes.

When the team topically treated skin ulcers on mice with the four factors, the ulcers grew healthy skin (known as epithelia) within 18 days. Over time, the epithelia expanded and connected to the surrounding skin, even in large ulcers. At three and six months later, the generated cells behaved like healthy skin cells in a number of molecular, genetic, and cellular tests.

The researchers are planning more studies to optimize the technique and begin testing it in additional ulcer models.