Viruses Go Lytic or Latent, Based on Viral DNA Mechanics

Viruses Go Lytic or Latent, Based on Viral DNA Mechanics

When viral DNA is more “liquidy,” it is more easily injected into host cells – so easily, in fact, that multiple virus-carrying capsids may squeeze their DNA payloads into a host cell simultaneously. This finding is significant because it helps explain why some viral infections follow a lytic course, in which the host cell is quickly killed, whereas some viral infections follow a latent course, in which the host cell’s genome incorporates viral DNA that often remains dormant, at least for a time. 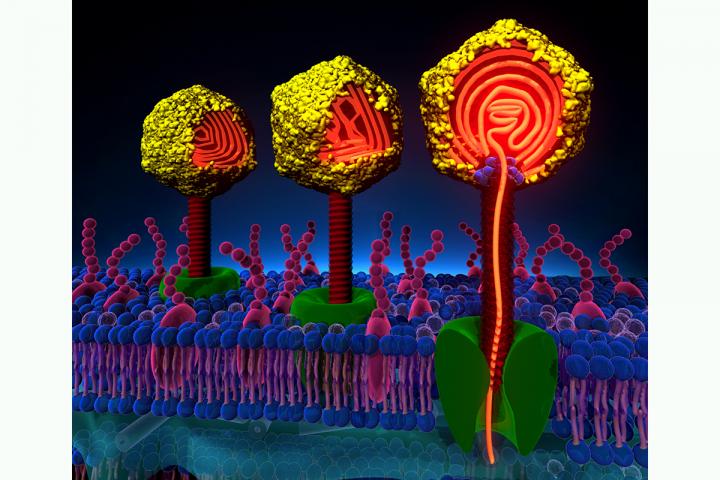 The suggestion that DNA fluidity is the answer comes from Alex Evilevitch, Ph.D., a professor of pathobiology at the University of Illinois at Urbana-Champaign. Unlike other scientists who studied injection dynamics by focusing on the structural properties of protein capsids, Dr. Evilevitch looked at the stresses and strains on the viral DNA molecules just before they are injected into a host.

“I found for the first time,” says Dr. Evilevitch, “that the mechanics of how DNA is packaged inside a virus determine the course of infection.” Evidence in support of this assertion appeared in the journal eLife, in an article titled, “The mobility of packaged phage genome controls ejection dynamics.”

“This study reveals that DNA ejection dynamics for phages can be synchronized (occurring within seconds) or desynchronized (displaying minutes-long delays in initiation) based on mobility of encapsidated DNA, which in turn is regulated by environmental factors, such as temperature and extra-cellular ionic conditions,” the article indicated. “This mechano-regulation of ejection dynamics is suggested to influence viral replication where the cell’s decision between lytic and latent infection is associated with synchronized or desynchronized delayed ejection events from phage population adsorbed to a cell.”

To arrive at these findings, Dr. Evilevitch used isothermal titration calorimetry, which can measure discrete changes in thermal energy in a system, to track the course of infection. In a previous study, his laboratory group discovered that the process of viral infection gives off heat. In the new study, Dr. Evilevitch exposed the host bacterium, Escherichia coli, to thousands of viral particles, than monitored the thermal ups and downs that occurred as infection progressed.

He found that the infections occurred either synchronously – with hundreds of viruses injecting their DNA into the bacterium at once – or randomly, with infections occurring more slowly in an uncoordinated fashion. A closer look at the viral genetic material prior to infection revealed that the DNA packaged inside the virus tended to be more liquid-like in the synchronous infections but stiffer during the random infections.

The synchronous infections corresponded closely with latent infections that preserved the host, while the slower, more random process of infection led to lytic events that killed the host.

“The DNA becomes more flexible; it has more of a fluid character,” Dr. Evilevitch says. “As a result, it’s more likely to be ejected – like toothpaste out of a tube. But if it’s solid, it’s going to get stuck inside the tube.”

The new findings are “good for virology,” he asserts.

The problem with latent viral infections is that, in times of stress for the host, the virus can suddenly turn lytic, taking over the cell and killing it after a mad bout of reproduction. “The many viral infections that we carry can remain latent for a very long time,” Dr. Evilevitch notes. “Sometimes they go lytic, and that’s when we develop symptoms.”

“It’s very important to know what regulates the switch from the latent state to the lytic state, so that we can perhaps stop these infections from spreading,” Dr. Evilevitch emphasizes.